I’ve already blogged about Drink Shop & Do – a new kind of consumer experience back in October 2010, and am glad to report they are going from strength to strength.

They have now taken over a former sex shop in the basement and created Drink Shop & Dance.

In something of a bizarre coincidence, it turns out that the husband of a former close colleague of mine from my previous job has a regular slot at DS&D. Andy and Luke have created Early Doors Disco as an alternative to the late night party scene in London. I think they describe what they do better than I could.

Early Doors Disco was spawned in the winter months of 2011. We were confused as to why there was no mid-week, early starting indie disco going on for those who wanted to have a few drinks, get their dance on and still be able to get the last train home. So, we got together a few friends, some of our favourite tunes and decided to get our clubnight on, with the help of the lovely folks at Drink, Shop & Dance in Kings Cross.

In terms of music, the hard and fast rule is that everything played after 7.30pm needs to be dance-able, so that you can drop in at any time and dance…for as long or as briefly as you like. Other than that we operate a fairly open music preference, which is really determined by the DJ on the night. Mixing up a bit of indie, pop, electro, soul, funk, rock, 90s hip hop and punk, with a slew of other genres thrown in depending on the feel of the night.

We’re not a fan of rules, but we’ve jotted down a few ‘guides’ for the EDD way of thinking:

I went along last Wednesday and the place was buzzing, even before the official start-time. The point of the story however, is that with just two performances under their belt the story went viral in the mainstream press, including Time Out, Who’s Jack, Londonist, Google London and  The Observer, as well as on a couple of BBC news programs.

This all goes to show that if your new product or service hits the Zeitgeist, then you don’t have to spend money on advertising or promotion, the media will come to you. 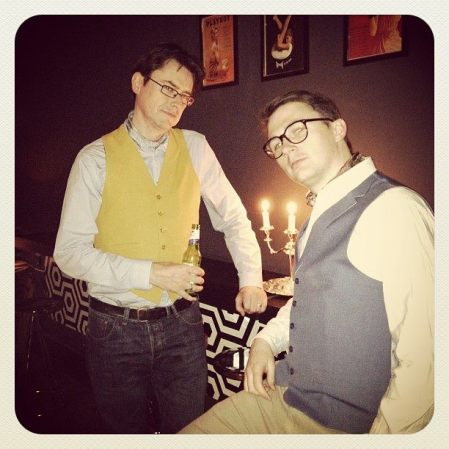 Andy and Luke hard at rest – image from Laura Tosney

This entry was posted on Monday, May 7th, 2012 at 11:29 pm and is filed under business startups, marketing, Uncategorized, work/life. You can follow any responses to this entry through the RSS 2.0 feed. You can leave a response, or trackback from your own site.

One Response to Early Doors Disco at Drink, Shop and Dance